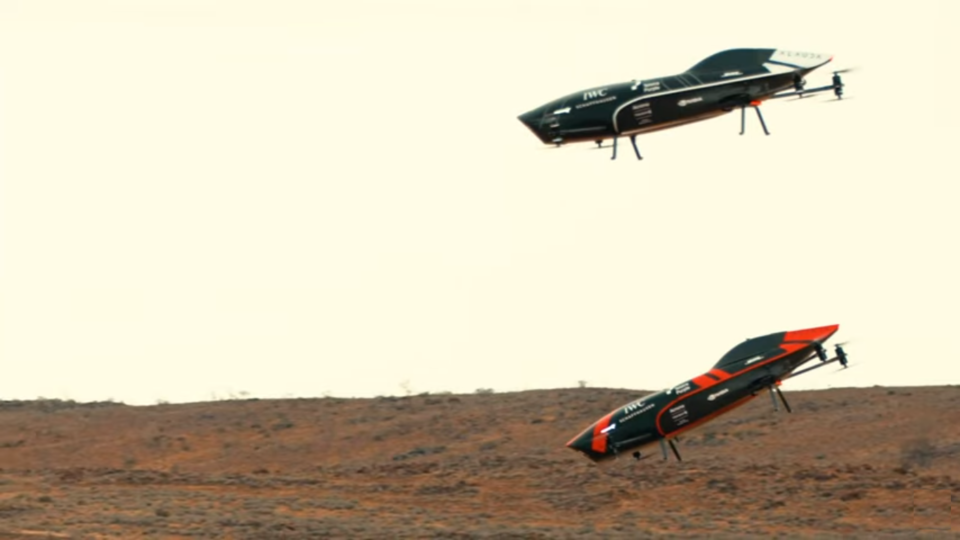 In Australia, the world’s first drag race between two flying cars was successfully finished. The drag race, which was more of a test run as part of pre-season preparations for a full series of F1-style air races later this year, featured two unmanned Airspeeder MK3s.

The drag race, which lasted roughly 300 meters at a height of 15 meters, featured a pair of Airspeeder Mk3s. The winning flying automobile had a top speed of 155 kilometers per hour. Alauda Aeronautics, an Australian firm that specialises in the development of flying electric vehicles with vertical take-off and landing (eVTOL) for use in high-speed races, demonstrated a drag race between two unmanned Airspeeder Mk3 multicopters. For the past three years, the business has been working on the development of the first eVTOL electric cars. The eVTOL Airspeeder Racing League, based at the Alauda Aeronautics headquarters in Adelaide, Australia, was just launched.

The two Airspeeder Mk3s engaged in a high-speed duel that lasted around 300 meters at a height of 15 meters. The victorious flying automobile hit a top speed of 155 kilometers per hour.

The pilot test of the Airspeeder Mk3 unmanned vehicles, according to Matt Pearson, CEO of Alauda Aeronautics, highlights the prospects of a future new type of road transport. In the near future, eVTOL EV races will not only create a new sport but will also contribute to the advancement of electric transportation.

The eVTOL Airspeeder league’s first official races will take place in the following two years. The first stage will be unmanned competitions, with the drivers operating the automobile using virtual reality technologies from ground cabins.

The next phases will consist of a series of Airspeeder EXA Series flights in which four teams from various countries will compete. Three stages of the worldwide competition will be held in an unmanned mode, with eVTOL electric vehicles controlled remotely.

🔴 vs ⚫️ – Who wins in this new airborne #motorsport?
This is the first of EXA Series’ test races – the EXA Drag Race.#dragrace #motorsport #racing #evtol #aviation #aerospace #drone #fpv pic.twitter.com/YvtYhToiLO

Only in 2023 will full-fledged international tournaments, in which ten companies will compete, be staged. These races will include crewed eVTOL electric vehicles. According to the organizers, the eVTOL Airspeeder league will aid in the transition of urban transportation to a new technical level, as well as ensuring rapid transportation in emergency situations while ensuring zero emissions of dangerous compounds into the atmosphere.

Tesla China VP hints that a new low-cost EV from Tesla is on the way.

Its faster than Tesla. Chinese Xpeng claims 124 miles in just 5 minutes of charging.