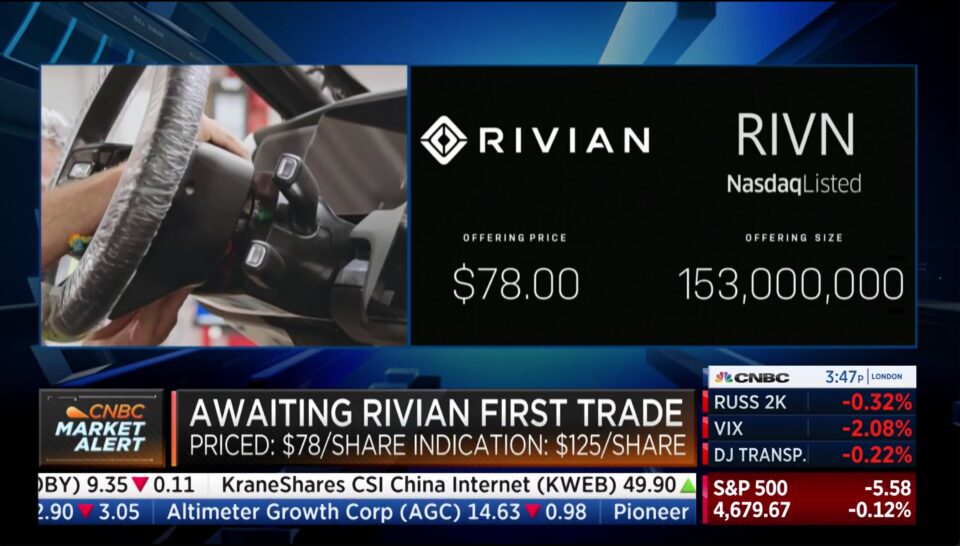 Rivian says it has also granted underwriters a 30-day option to buy up to an additional 22,950,000 shares of Class A common stock at the initial public offering price.

“To build the kind of future our kids and our kids’ kids deserve, extraordinary steps must be taken to stop the carbonization of our atmosphere and preserve our natural ecosystems. Over the next two decades we need to completely transform our planet’s transportation and energy systems, and today marks an important step in that journey,” said Rivian CEO, RJ Scaringe

Now indicating to open at $125/share, giving Rivian a $107B market cap. pic.twitter.com/bJgE0RrhDf

Scaringe told Reuters that the company plans to produce 1 million cars by 2030, with four plants across the world supporting it. “We’d better be increasing at least that fast; certainly before the end of the decade, as we see it,” Scaringe added. Rivian’s Illinois plant, which manufactures Amazon’s delivery vans, is also capable of producing other vehicles, according to the company’s CEO. “We developed the line to have headroom above and beyond Amazon’s requirements,” Scaringe continued. “

“We developed the line to have headroom above and beyond Amazon’s requirements,” Scaringe continued. “It’s because of that that we’re able to get into some of these other commercial van spaces.” Rivian began delivering vehicles to staff this month and expects to produce 1,200 vehicles by the end of 2021 at its factory in Normal, Illinois, which has a 150,000-car-per-year capacity. As more Rivian models are created, that number is predicted to rise to 200,000 by 2023.

UK based start-up ZipCharge has launched a new portable charger for EVs at the Cop26 climate summit in Glasgow.