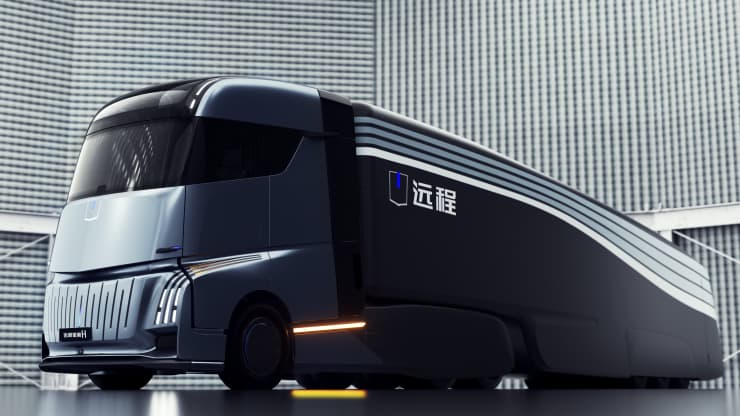 Farizon Auto, Geely’s commercial vehicle company, plans to launch the new Homtruck in 2024 and is eyeing overseas markets as well, according to the division’s CEO Mike Fan, who spoke to CNBC on Monday.

“This product is designed and developed with a worldwide market in mind,” Fan said, according to a CNBC translation, adding that the new car will be targeted at Europe, Korea, Japan, and North America.

The unveiling of Geely’s Homtruck comes as a number of other automakers, like Mercedes-Daimler Benz’s and Warren Buffett’s BYD, have launched their own electric trucks. Tesla, which launched its own truck, the Semi, in 2017, has postponed production for the time being.

The Homtruck will be powered by a variety of technologies, including methanol hybrid and pure electric. Geely has been investing in methanol-powered batteries for several years, and several of its models now feature this power choice. Farizon added that the Homtruck’s batteries may be swapped out, reducing the need to charge.

According to the company, the inside features a bathroom and toilet, a single bed, refrigerator, kitchen area, and a tiny washing machine.

The Homtruck was designed with self-driving in mind.

The vehicle would be able to deploy some partially autonomous driverless features, according to Geely. Trucks will also be able to communicate with one another on longer excursions in order to maintain a safe speed and distance.

Geely wants to introduce autonomous driving in three stages, according to Fan. The company intends to have some partial driverless functions by 2023, followed by more advanced systems in 2026. Geely wants to be fully autonomous by 2030.

“I’m sure autonomous driving norms and standards are being developed,” Fan remarked.

“Based on market demand and our own firm’s development demand, [Geely] as a corporation should create and improve certain technologies ahead of schedule.” So that when the regulations and conditions are in place, we can quickly bring our technology to market.”

Raw material prices are rising, and there is a chip shortage.

Automobile manufacturers have also had to contend with rising raw material costs and a global shortage of semiconductors.

Vehicle manufacturers are keeping an eye on lithium prices, which have reached new highs this year.

According to a report released on Oct. 29 by Benchmark Mineral Intelligence, battery makers are beginning to pass on pricing increases to automakers, “which might have a substantial impact on electric vehicles coming to market between 2022 and 2024.”

Ahead of SEMA, 2022 GMC Hummer EV unveils its accessories.

Before 2022, Rivian will deliver over 1,000 production R1T EV trucks as Pre-orders are booming.