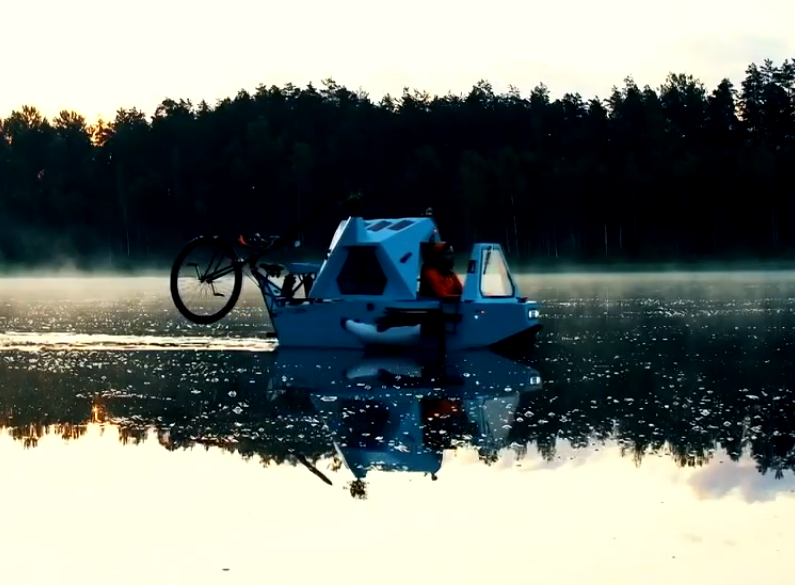 This amphibious electric boat and trike that doubles as a shelter to sleep in at night was designed for ‘global expeditions.’

The Z-Triton from Zeltini, a Latvian design studio, could be the ideal adventure vehicle.

Aigars Lauzis designed a tiny house that can also function as a boat and a tricycle, allowing it to travel on land and water.

While the Z-triton is not yet available for purchase, Zeltini intends to begin renting it out by 2021.

The studio’s goal is to build long-lasting goods and prototypes that are both functional and enjoyable. This design, which looks a little like something out of Wes Anderson’s The Life Aquatic with Steve Zissou, is perfect for the job. The Temple of Poop, a composting toilet that fertilises its own roof garden, is an example of their previous work.

The Z-Triton is a combination of a tiny house, a tricycle, and a watercraft.
The vehicle’s wheels fold up to allow it to transition from land to water.

The front of a tricycle is on one side, with a bike seat for the driver. As it transforms into a boat, the back becomes the front.

The Z-triton is electrically powered, and the driver can regulate power, turn signals, interior temperature, and more from the control panel.
It can be powered by riding on land, with the option of electrical assistance.
It has a range of up to 25 miles on land and 19 miles in water.

It comfortably fits two persons, according to Zeltini.
The inside is adaptable, with extra storage built into the sides and bench seating that can be relocated to different locations or removed to create a sleeping area.

Both passengers can sleep onboard if they have sleeping bags with them.
On board, there’s also a small kitchen for making and storing meals.
The inside and exterior are both decorated with blue and orange accents.
The steering wheel is also a stylised orange “Z.”

The Z-Triton, according to Zeltini, is ideal for “global travels” or “a weekend vacation deep in nature.”

EVs are not more likely to become stuck in traffic jams than traditional cars.

RGNT No.1 Classic inspired by Yamaha RX100 debuts in US & Europe.