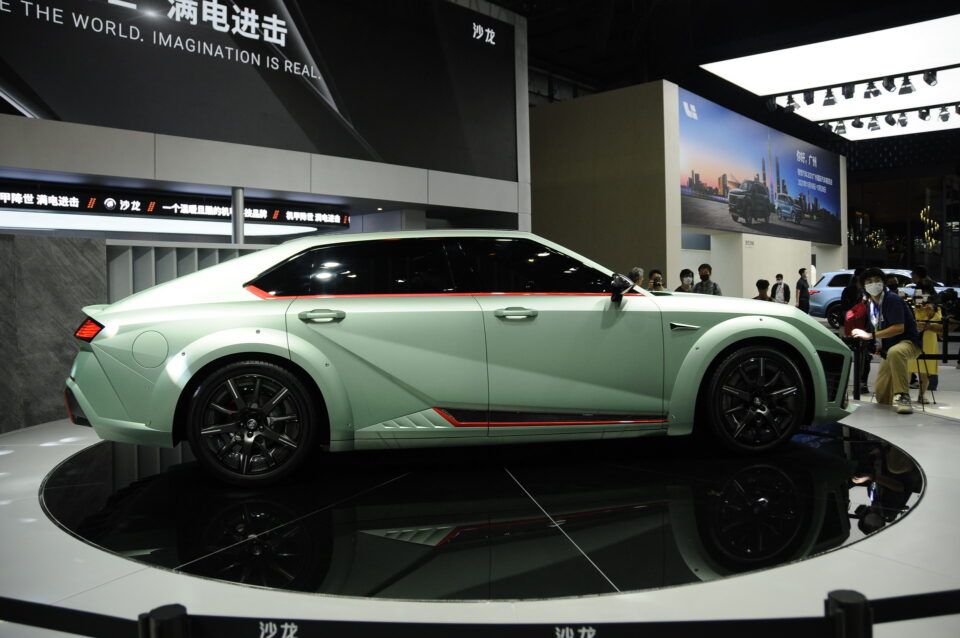 At the 2021 Guangzhou Auto Show, Great Wall Motors introduced its new premium brand, Saloon (according to the company’s English website, or Salon, according to Google’s translation from Chinese), as well as its first model, the Jijialong, which translates to ‘Mecha Dragon’ in English. The new four-door coupe features sharp appearance, a luxurious interior, and an all-electric motor.

To begin, let’s address the elephant in the room: the Mecha Dragon isn’t the most gorgeous car on display at this year’s Guangzhou Auto Show. The car is described as a “medium-to-large coupe” with a length of 5.2 meters (204.7 inches) with an exterior that resembles “mechanical armor” by the Chinese manufacturer.

Some think Saloon was influenced by the Tesla Cybertruck, which combines angular elements with softer sides to create a Tesla Model S competitor. The headlamps are reminiscent of the facelifted Lamborghini Gallardo, the bumper is intricate, and the bonnet scoop appears like it came straight out of a low-resolution video game.

The various dynamic lines and a surface treatment comparable to the Hyundai Elantra, especially when combined with the round bold-on fenders, are bewildering to the eyes on the profile. The A-pillar is excessively flat and the front overhang is too long in proportion. The rear end, which has a fastback style reminiscent of the Audi A7 Sportback and a showy diffuser with false exhaust pipes, isn’t much better. Michelin performance tyres and Brembo brakes are also included in the model.

A totally electric platform created by Great Wall Motors is hidden beneath the strange bodywork. The Mecha Dragon can accelerate from 0-100 km/h in 3.7 seconds thanks to a combined output of 543 hp (405 kW / 551 PS) and torque of up to 750 Nm (553 lb-ft) from four electric motors.

According to China’s CLTP cycle, Great Wall’s Dayu battery pack with a capacity of 115kWh and 800-volt technology offers an electric range of 802 km (498 miles). What’s more astounding is that the battery can add 401 km (249 miles) of range in just 10 minutes because to its ultra-fast charging capacity. The new generation battery is also much safer, as it can endure temperatures of up to 1,000 degrees Celsius (1,832 degrees Fahrenheit).

The inside is made of high-quality materials and features cutting-edge safety, infotainment, and networking technology. The dashboard features a digital instrument cluster and a large touchscreen panel that takes up the majority of the dashboard’s width. With touch-sensitive buttons positioned on the door panels, a panoramic sunroof, and what appears to be a quality sound system, the back passengers appear to have plenty of legroom.

Most crucially, Great Wall Motors says that the Mecha Dragon is the world’s first vehicle with four lidars and 38 intelligent sensing components, such as cameras, radars, and ultrasonic sensors. This kind of equipment suggests that the Mecha Dragon and other forthcoming Saloon models will have advanced self-driving capabilities.

The Saloon Mecha Dragon may appear to be a concept car, but it is actually a commercial model with an initial run of 101 units for $488,000 ($76,481). Great Wall Motor plans to launch a “Mecha Technology” section for its new Saloon brand, which aims to enter the “luxury all-electric vehicle market” with prices ranging from 400,000 to 800,000 dollars ($62,685). This means that cars will be more expensive than the Mecha Dragon, with a completely electric SUV likely to be one of them.

Despite analysts’ predictions, Volkswagen ID. is performing well in China.

After USA, Tesla Model Y SR is officially SOLD OUT in China until 2022 too.